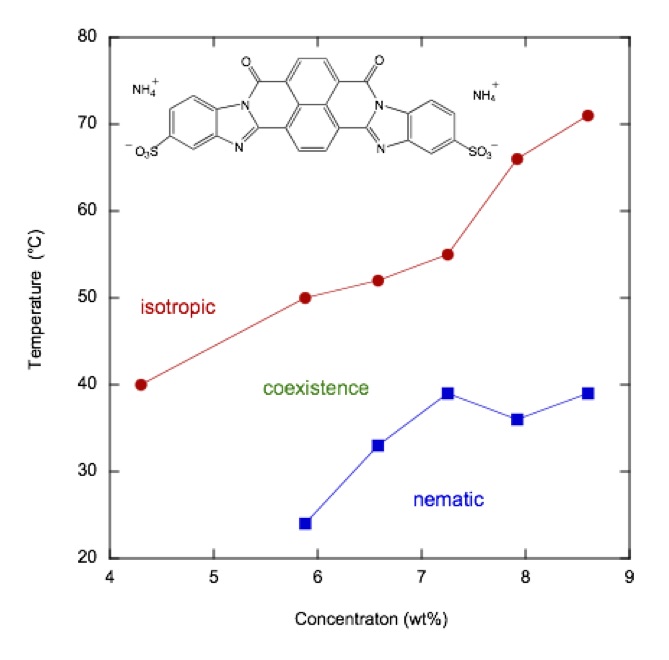 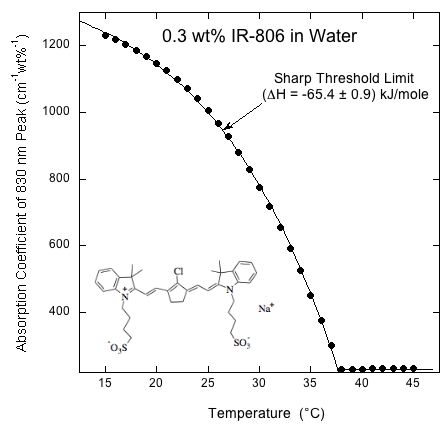 Many dyes that form liquid crystal phases assemble isodesmically. This means that the free energy change when a molecule joins or leaves an assembly is independent of the assembly size. In this case, there is no threshold concentration or temperature for the assembly process to start, and the distribution of assembly sizes is extremely broad. Since each molecule acts independently of the others, this case illustrates a non-cooperative assembly process.
Other dyes assemble at lower concentrations (less than 1 wt%) and go through a very different process. For example, the dye IR-806 forms the assemblies of the liquid crystal phase in an extremely cooperative way with a sharp threshold. This is shown in the figure where it is clear that the theoretical curve for the limit of extremely cooperativity follows the data nicely. 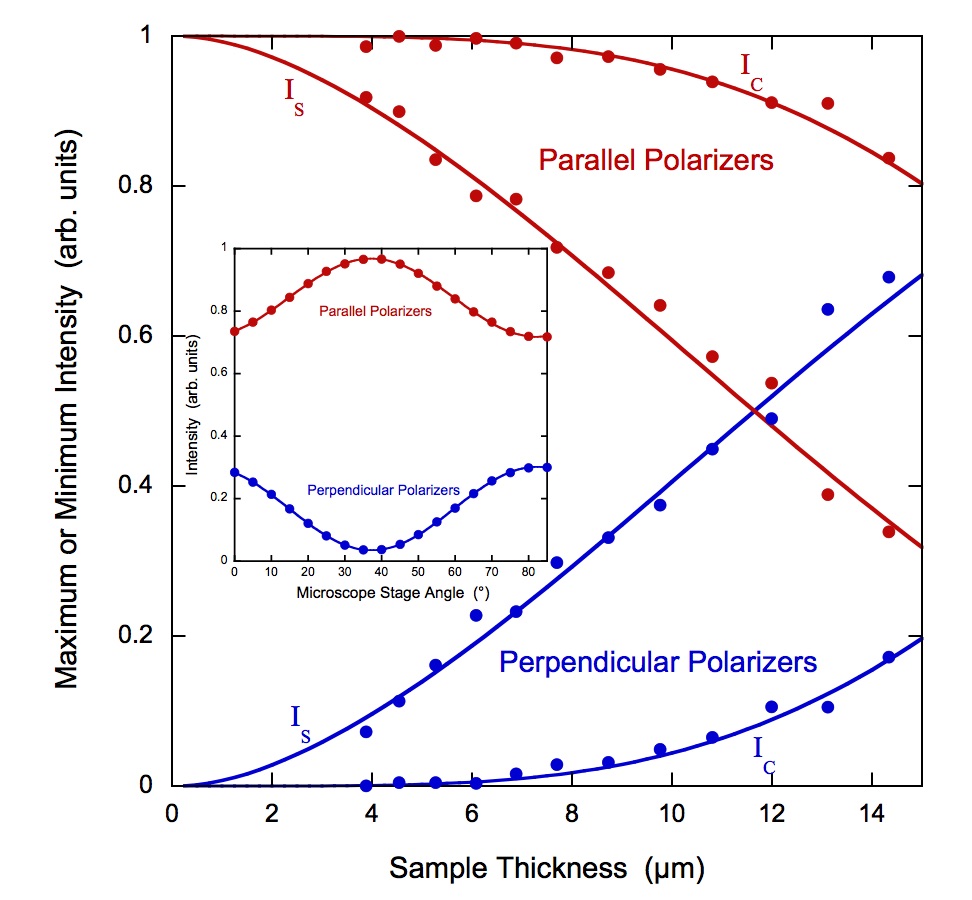 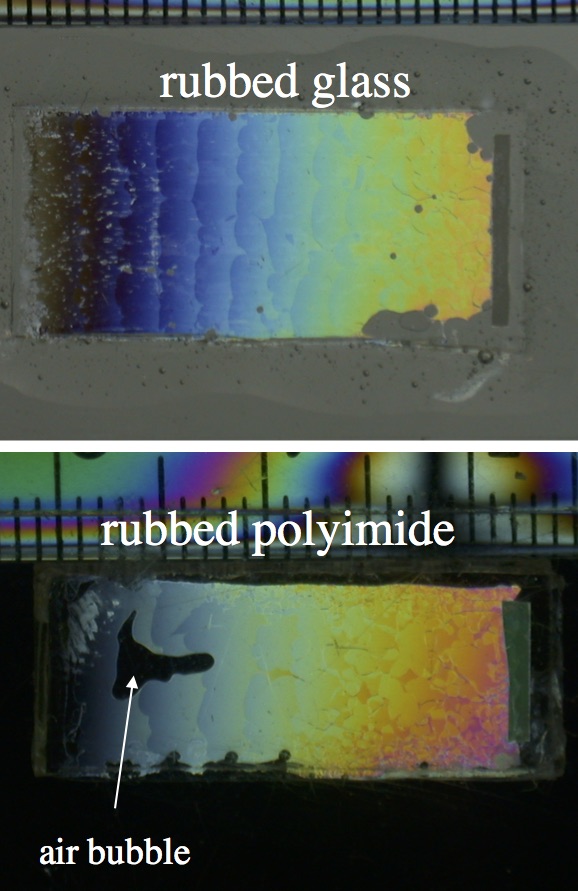 A chromonic liquid crystal with a chiral nematic phase instead of a nematic phase can be prepared by dissolving a small amount of a chiral molecule in the chromonic liquid crystal. For example, if L-alanine is added to 15 wt% di-sodium cromoglycate, the inverse of the pitch of the chiral nematic phase at 25°C is proportional to the concentration of L-alanine. One way to measure the pitch is to use the wedge cells with rubbing directions at right angles as in the anchoring strength measurements. The same optics experiments are performed, but now the anchoring strength is known and the pitch can be determined.
A more traditional way to measure the pitch is to fabricate what is called a Cano wedge cell. This is simply a cell of variable thickness with the two glass surfaces rubbed in the same direction. The result is a cell in which an integer number of half-pitches of the chiral nematic director helix fits in the space between the two glass surfaces. A deffect line separates these domains of different twist, so the result is a series of defect lines equally separated from each other. Measurement of the distance between these defect lines and knowledge of the wedge angle of the cell allow the pitch to be determined. Experiments with Cano wedge cells yield pitch measurements consistent with the results of the experiments similar to the anchoring strength measurements.
The image shows what the Cano wedge cells look like. Because the anchoring strength is quite weak, the defect lines are not straight. Notice also that the defect lines are similar for rubbed glass and a rubbed polyimide alignment layer, which makes sense since the anchoring strengths are similar. 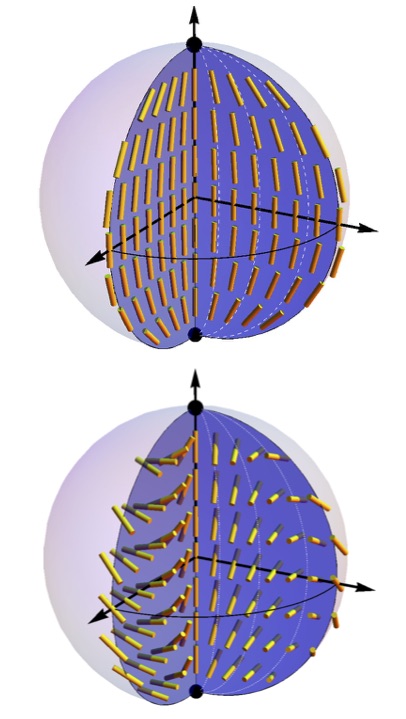 One of the differences between the nematic phase of thermotropic liquid crystals (oriented molecules without a solvent) and chromonic liquid crystals (oriented assemblies of molecules in a solvent) is the free energy necessary to distort the director from its ground state of uniform orientation. There are three basic types of deformation (splay, twist, and bend), and the elastic constants for each of these are similar for thermotropic nematics. On the other hand, for chromonic nematics, the twist elastic constant is roughly an order of magnitude less than the other two. One important result of this is that if a chromonic nematic phase is forced to distort, it twists much more than it splays or bends.
For example, if the director at the surface of a droplet of a thermotropic nematic liquid crystal tends to be parallel to the surface but at any azimuthal angle, the director configuration is usually bipolar, as shown in the upper half of the figure. This is the lowest free energy configuration because there is almost no splay and twist distortion, concentrating almost all of the distortion in bend. However, a droplet of a chromonic nematic liquid crystal surrounded by oil adopts a twisted bipolar director configuration as shown in the lower part of the figure. The splay distortion is significantly reduced, but both the twist and bend distortions are increased. But the low value of the twist elastic constant means that the increase in free energy due to additional twist and bend distortion is less than the decrease in free energy due to reduced splay distortion. The amount the director twists between the bipolar axis and the surface is given by the value of the twist angle that minimizes the free energy. In the case of the nematic phase of the chromonic liquid crystal Sunset Yellow FCF, polarized light experiments reveal that this twist angle is over 100°! 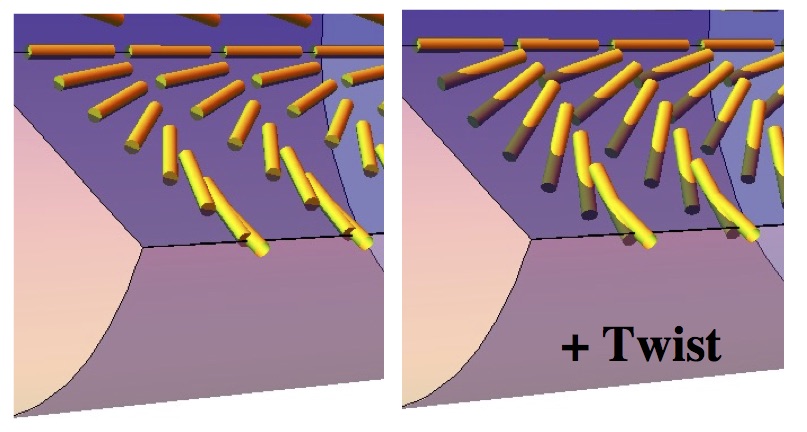 A similar phenomena occurs when a chromonic liquid crystal is confined to a cylindrical capillary tube. With special surface treatment, the director prefers to lie perpendicular to the surface. When the splay, twist, and bend elastic constants are similar, the escaped radial director configuration is the one with the lowest free energy (left half of the figure). But the nematic phase of chromonic liquid crystals with such a small twist elastic constant posseses a twisted form of the escaped radial configuration (right half of the figure). Again, optical experiments using polarized light show that for Sunset Yellow FCF the twist angle is on the order of 60° 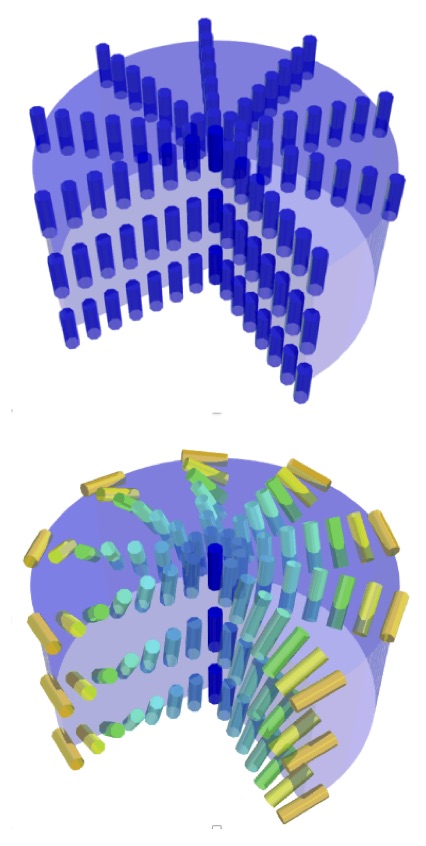 If the inside of the glass capillary is not treated in any way, the director at the surface prefers to lie in the plane of the surface. Although the situation appears to be very similar to the droplet case, there are two fundamental differences. First, another type of distortion called saddle-splay with an elastic constant K24 contributes to the free energy in this case, whereas it does not in the other cases. Second, whereas there is only one principal radius of curvature for a spherical surface, there are two principal radii of curvature for a cylindrical surface. This means that an interaction between the director and the cylindrical surface may depend on the azimuthal angle, producing an assymetric anchoring energy. What is so intriquing about the two effects is that for a cylindrical surface they add identical terms to the free energy.
The most simple director configuation one can image is called the para-axial configuration shown in the upper half of the figure. The director is everywhere parallel to the cylinder axis, and therefore there is no splay, twist, or bend free energy contributions. However, if the saddle-splay term is added to the free energy, the escaped-twisted director configuration is the lowest energy one (shown in the lower half of the figure). Again, optical experiments using polarized light show that for Sunset Yellow FCF the twist angle is a little less than 90°.
There is good evidence that it is the saddle-splay elasticity at work in this case and not an assymmetric anchoring interaction at the inner cylinder surface. Since there is no alignment layer on the glass, the only anchoring interaction must come from irregularities of the surface. But AFM images of the inner cylindrical surface reveal irregularities so small that their effect on the free energy is much smaller than what is expected for saddle-splay elasticity. Assuming saddle-splay elasticity is at play, the ratio of the elastic constant K24 to the bend elastic constant K3 is determined to be about 6.6. K24 has not been measured very often and the results vary considerably, but this value raises the question of whether K24 is relatively large for chromonic liquid crystals.